The Tazers is an American punk rock band that was formed in 1979 in the city of La Habra, California. The group was a part of the Orange County music scene. The band members included Charlie Glancy on lead guitar and metal trash can, Craig Brisco on drums, Mitch McNally, and Sean Brown on vocals and guitar. (Wikipedia) 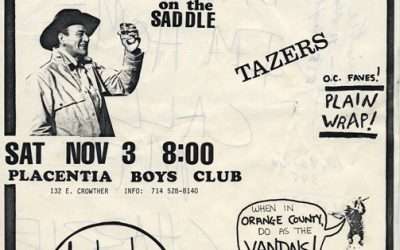 The Vandals, Blood on the Saddle, Tazers, and Plain Wrap at Placentia Boys Club on November 3, 1984