Scream is an American hardcore punk band from Washington, D.C.; they originally formed in the suburb of Bailey’s Crossroads, Virginia, United States. Scream originally formed in 1981 within the vanguard of the Washington Hardcore explosion. In 2009, the band reunited, and as of January 2012 were on tour in Europe. (Wikipedia) 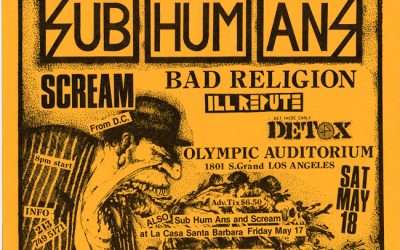 Subhumans, Scream, Bad Religion, Ill Repute, and Detox at the Olympic Auditorium in Los Angeles, CA on May 18, 1985